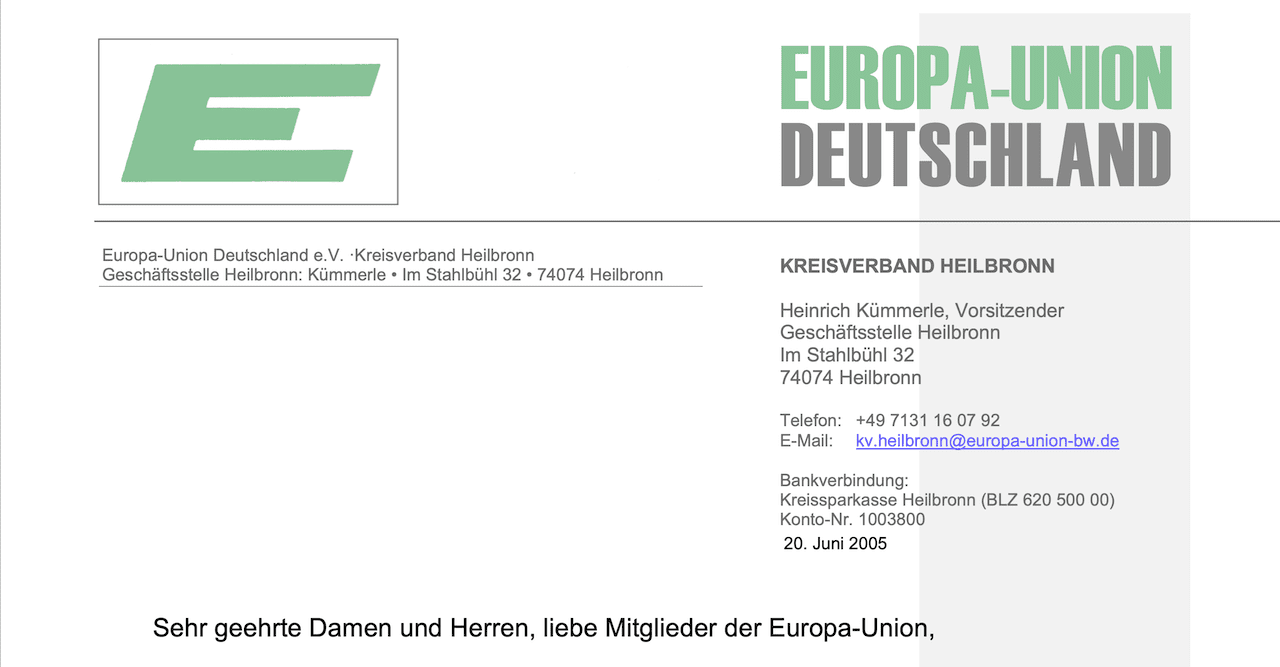 Ladies and gentlemen, dear members of the EUROPA-UNION,

after 17 years Mr Prof. Dr. Walter Dorr in the presence of our state chairman, Mr MEP Rainer Wieland, resigned from the district presidency of the EUROPA-UNION Heilbronn on June 10, 2005 for reasons of age. The general meeting of the district association then elected me as their new chairman and Mr dr Walter Dorr at the suggestion of mr dr Manfred Weinman elected Honorary President by acclamation.

With this letter I would like to take the opportunity to briefly introduce myself to you. I was born on October 30.10.1962th, 1983 in Heilbronn and took an active part in the social life of the city, the district and the city until I graduated from high school in 80. Since my career choice, being an officer in our fatherland, has not only obligated me in several federal states, but also in France, Bosnia-Herzegovina and Poland, it was no longer possible for me to volunteer in my hometown as I would like to would have wished. Nevertheless, since the end of the 02.05.1992s I have been able to actively participate in the club life of the Heilbronn district association of the EUROPA-UNION. All the more so because I met and fell in love with my wife on May XNUMXnd, XNUMX during the meeting point Europe. I am now the proud father of two sons who are growing up as Europeans in the truest sense of the word, but without losing their roots in Heilbronn.

Second, I want to say thank you. From the members of the district association for the many years of good cooperation and the trust they have placed in me. To our honorary chairman, Mr dr Walter Dorr, for the excellent work he did as my predecessor; she is my role model and obligation at the same time. From our foreign associations for their work and contributions to the social and cultural life of the city and the district. And last but not least, thanks to the city of Heilbronn and its representatives for their foresight and the support they have been giving to the EUROPA-UNION and thus also to our foreign fellow citizens over the years.

Fourth, allow me a few thoughts on Europe. Europe is among us! It is not only a geopolitical imperative or a technological and economic necessity, but above all a social and cultural obligation. We cannot turn a blind eye to Europe or, as democrats, simply vote Europe out of office; no, Europe is both an obligation and a challenge for us. We have to live and shape Europe, we owe it to ourselves, to our fellow citizens and, above all, to future generations. The house of Europe must not be run down; it has to be constantly maintained or maintained, and maybe renovated or expanded at some point. Articulating this, discussing it, making it understandable and tangible for our roommates is the task of the EUROPA-UNION - today more than ever before!

Fifth, it is my intention during my tenure to continue the good work that the Heilbronn District Association has done over the years. Europe must be too important to us to leave it to others! On the one hand, we want to continue to be the point of contact for our foreign fellow citizens in Heilbronn and, on the other hand, we want to make Europe a little more understandable for our German fellow citizens, take away fears and awaken mutual understanding. To this end, I imagine strengthening the importance of the district association Heilbronn vis-à-vis the state and federal government by increasing our number of members, reactivating our youth organization, the Young European Federalists, in Heilbronn and improving our financial possibilities; Furthermore, to increase our range and number of events in the medium to long term, to actively promote Europe in schools and other educational institutions and, last but not least, to bring young people and members closer to Europe through travel and exchange programs.

This will only be possible for us if we all continue to live with commitment and zest for action in Heilbronn and make Europe an experience.

That's why I ask you to try, bearing in mind that time is our most precious asset next to health