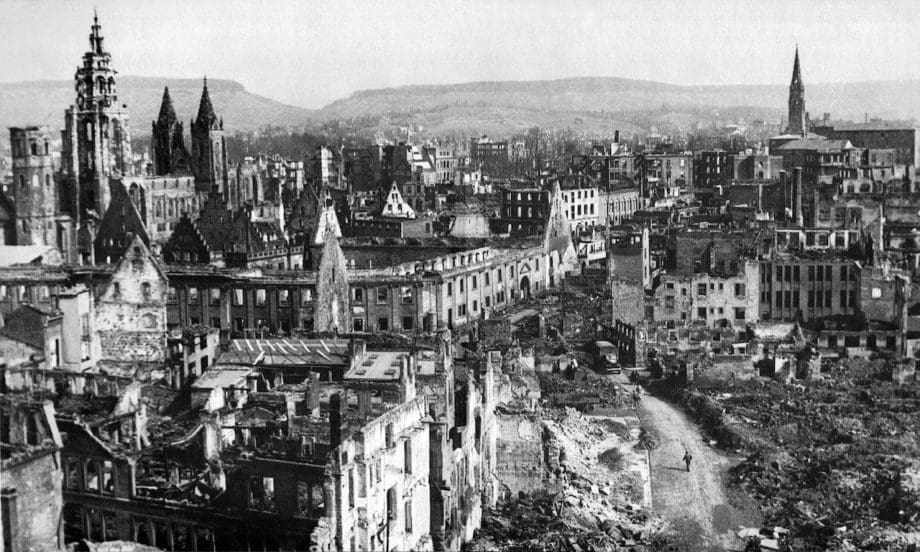 Post photo: Heilbronn 1945 | Recording of the US Armed Forces | Scanned by Uwe Jacobi

When the European Federalists reunited after some 17 years of separation, during which they had tried to unite Europe either as a "supranational Movement of European Federalists" (sMEF) or as "Aktion Europäischer Federalisten" (AEF) into a single association in 1973, they agreed on three founding fathers of the federal idea and nine fundamental documents.

Lesser known is the fact that they also changed that day the name of the European level organization from “European Union of Federalists” (UEF in French) into the organization's name “Union of European Federalists” (still the same abbreviation, but now valid for all languages).

By the way, the “Young European Federalists” (JEF in German) reunited in 1972, which is probably why they keep this date as the date of their own foundation, which, however, actually took place on the 28thth of May 1949 in Sankt Goar, Germany (“Juventus”).

The reunification congress from April 13th to 15th 1973 in Brussels, which met under the motto “The United European Federalists Fight for European Democracy”, determined that the European Federalists are inspired by Immanuel Kant, Alexander Hamilton and Pierre Joseph Proudhon, and already listed the common fundamental documents presented in this article in the preamble of the new statutes.

The repute Immanuel Kant and Alexander Hamilton are leaders of federalist thought is still undisputed today. In 1795, the former laid the foundation with his philosophical draft for perpetual peace for all federalists. Alexander Hamilton, one of the founding fathers of the United States of America and author of 51 of in total 85 articles in the Federalist Papers (1788), essentially laid the foundations of modern, representative democracy. Pierre Joseph Proudhon is listed as third because he is considered to be the source of the idea of ​​communalism (probably better known as integral federalism), which as early as 1947 were seen by the majority as the view of federalism that should actually be striven for. Proudhon is still generally known today for his provocative statement “Property is theft”, which comes from his work “Qu'est ce que la propriété? Our research on the principle of your rights and your government." (1840).

The nine foundations of federalism named by the European Federalists are the guidelines of the “Federal Union” (1939); the “Guiding Principles for a New Europe” of the Europa-Union Switzerland (February 1940); the “Ventotene Manifesto” (July 1941); the “Geneva Declarations” of the European resistance fighters (May 1944); the “Hertenstein program” (September 1946); the “Declaration” of the first UEF Congress in Montreux (Aug 1947); the “Political Resolution” of the first Congress of the EUROPA-UNION Germany (May 1949); the “Federal charter“ adopted by the second UEF Congress in Montreux (April 1964); and the historic”Declaration of Principles” adopted at the Nancy Congress of the sMEF in April 1972.

In the meantime, several years have passed, and I, personally, deem the following documents as noteworthy and likewise important: the “Political Declaration” from the Unification Congress of the UEF itself, which was stipulated on April 15th 1973; the EUROPE UNION Germany's “Twelve Theses for Europe” (April 14th 1964); the “Kiel Program for Europe” of the EUROPA-UNION (June 27thth 1978); its”Charter of European Identity” (October 28th 1995); and the "Charter of Fundamental Rights” of the European Union itself (December 1st 2009).

With these 14 documents listed here, one has a comprehensive overview not only of European federalism but also of federalism as a whole. This distinction is made since the World Federalists distinguish themselves from the European Federalists only in that the World Federalists have wanted to achieve a world union through a world parliament already in 1947 (constitutionalists), whereas the European Federalists decided in 1947 to first create a free Europe, then including the rest of Europe, which then would have functioned as a blueprint for other world regions and a later world union. You will find all these documents online as annexes to the book “Europe is for Everyone!”(2020)

From the very beginning, the European Federalists differentiated themselves into two strands: constitutionalists and functionalists. The former wanted to create the European federal state through a European Parliament – ​​the Altiero Spinelli approach — whereas the latter promoted the growing together of the member states through common institutions – the Jean Monnet approach. The above mentioned split into two federalist organizations occurred since the European Economic Community entered into force, and reflects the difference between these political visions: the Italian federalists chose the constitutional method of action while the German and Dutch federalists chose functionalism.

Communalism, leading to the deepest change in European structures, emerged, at least in my opinion, out of the currents of the Ordre Nouveau (France) and the acceptance of the Christian principle of subsidiarity, and thus still today offers the only sustainable federal solution for present and future societies, of which the majority of the European Federalist was already convinced in 1947.

Therefore, constitutionalists and functionalists should consider themselves still altogether as communalists. To support this opinion, I highly recommend Michael Wolffsohn's book “Towards World Peace – A Political Draft” (2015).

The biggest challenge to the communalist idea is in short the following: those who have made themselves comfortable in the current and mostly outdated structures are against a federal restructuring from the bottom up, starting from the municipalities, across the regions to a federal state. Thus, from the beginning, together with nationalists and centralists, they have put a brake on any further federal development and have helped to ensure that the United States of Europe as well as a future world union - which equates to eternal peace - remains a dream for many.

Furthermore, I would like to stress that the European idea is absolutely not compatible with the pan-European idea, and thus European Federalists are undoubtedly not “superstate Europeans”, who are still nationalists (Kemal Dervis sort of rebranded the pan-Europeans as such in a speech in Stuttgart in 2005). The institutional model promoted by the "superstate Europeans" is, in my view, "European nationalism". In fact, the distinctive character of "European nationalism" is the extension of the model of the centralized and indivisible model of the nation-state to the European level, in other words, a European nation-state. Whereas the European federalists are not only convinced of the world union, which is clearly stated in UEF's motto: “A United Europe in a United World”, but also in a pure federalist approach manifested in the motto of the European Union: “United in Diversity”.

Andrew Duff argues in his book “On Governing Europe – A Federal Experiment” (2018) that the European Federalists are strongest in those countries which exhibited an essential resistance during the Second World War. Therefore, the European idea has no foundation in the United Kingdom at all; the relicts of the Federal Union act as its exception. And that is why the British favor a European confederation. Whereas in France the former Vichy regime is still influential, causing the UEF spirit to vanish and keeping the idea of ​​a “Europe of the fatherlands” as favorable. This also explains why the UEF spirit is mostly visible and active in Italy.

But why not in Germany? This is caused by the UEF's birth defect which materialized in that the UEF forced the UEF members in Germany 1947 to merge with non-federalists and “superstate Europeans” in order to become an accepted UEF section with the proper name EUROPA-UNION Germany, which finally happened on November 20th 1947. The UEF representative for Germany, Ernst von Schenk, had signaled repeatedly before that only one common German organization could become a UEF section.

Nowadays, many assume that this caused the EUROPA-UNION to become the biggest UEF section, but the membership numbers show different. Over all the years, these numbers stayed the same as before the forced merger. Only on the EUROPA-UNION's organizational boards do the "superstate Europeans" slowly but steadily poison the UEF spirit in Germany, interestingly supported by some Austrian federalists, where the pan-European idea was created in 1923.

That is why even board members of the EUROPA-UNION try to erase, for instance, the “Twelve Theses for Europe” (1964), reject an originally foreseen membership of the EUROPA-UNION in the World Federalist Movement (WFM), or even reject new UEF decisions, like promoting the transnational lists.

Even worse, all over Europe, “superstate Europeans” close their ranks in and outside of the UEF, using not only the European Movement's network to promote the European superstate - some may even call it the IV. Reich. As a "Menetekel" you can take the "intronization" of the last president of the European Commission or the reluctance to involve parliaments and the civil society in vital decisions about the future of Europe.

While on the other side, the UEF — and this some 50 years after its reunification and some 75 years after its founding — still consists of confederalists, “superstate Europeans”, World and European Federalists, and discusses internal procedures. Most common of all is only that UEF's origin is not known by most of its members nor are the founding documents.

I made this post on January 2, 2021 for the Federalist Debate written where it appeared in the first issue March 2021.

The post is based on a blog entry that I published on June 4, 2020 under the title "Nine plus five' published on my weblog, and on which one Luis Levi, editor of the Federalist Debate.