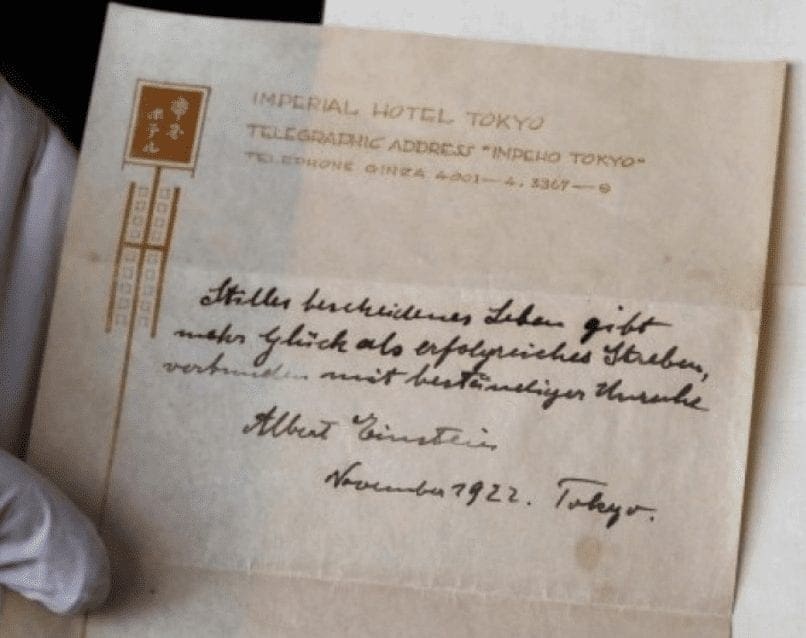 This quip wrote Albert Einstein as a type of tip for a Tokyo hotel clerk in November 1922.

I don't know whether the hotel employee was happy about it.

Friedrich Nietzsche even put this knowledge into a poem

Don't stay on level ground!
Don't climb too high!
The world looks the most beautiful
From halfway up.

And for almost everyone who does not want to agree with this realization, at some point a human mechanism will come into effect, which I would like to call rose-colored glasses.

A man hopes piously and quietly,
That one day he'll get what he wants.
Until he succumbs to madness
After all, he wants what he gets.

Many of us, who are still at the beginning or even in the middle of our own career aspirations, climbing the above-mentioned heights, like to sublimate our first and certainly further disappointments with consumption, the basis of our economic system.

And for all those who have long since dropped out of this race because they were usually unable to keep up from the start, consumption is also available as the true “opium for the people”. No amount of money is too small to be able to buy something completely useless with it, and this solely for the purpose of gratification.

Even for those who can really afford everything, consumption offers things for which no amount of money would be too great, but ultimately it comes down to the same thing.

But it is really bad for those people who, even at the end of their lives, only have mere consumption left.

In the meantime, there are completely new ways for these people to master the problem. One of them is called "death cleaning"; the idea of ​​"decluttering" one's own life originally comes from Sweden and is called "Döstädning" there.

Margaret Magnusson even wrote his own book about it, which we call “Ms. Magnusson's art of arranging the last things in life" carries.

In my opinion, no one can start decluttering their own life too early, because ultimately it will lead to them reflecting on it more closely, and who knows, it will also change their own consumer behavior.

And then without any instruction from people who, for a variety of reasons, would like to regulate the consumer behavior of their fellow citizens.

Since time immemorial, education has been a promising solution for getting your own life under control, no matter how it plays out. Which in turn would lead to consumption being steered towards more sustainable channels, and ultimately we all benefit from it – without any instructions or regulations.

The nice thing about education as a solution is that, firstly, you really can never get enough of it, even if we are all convinced that we have never had too little, and secondly, this resource is actually endless and for everyone, at least in the free world, is equally accessible.