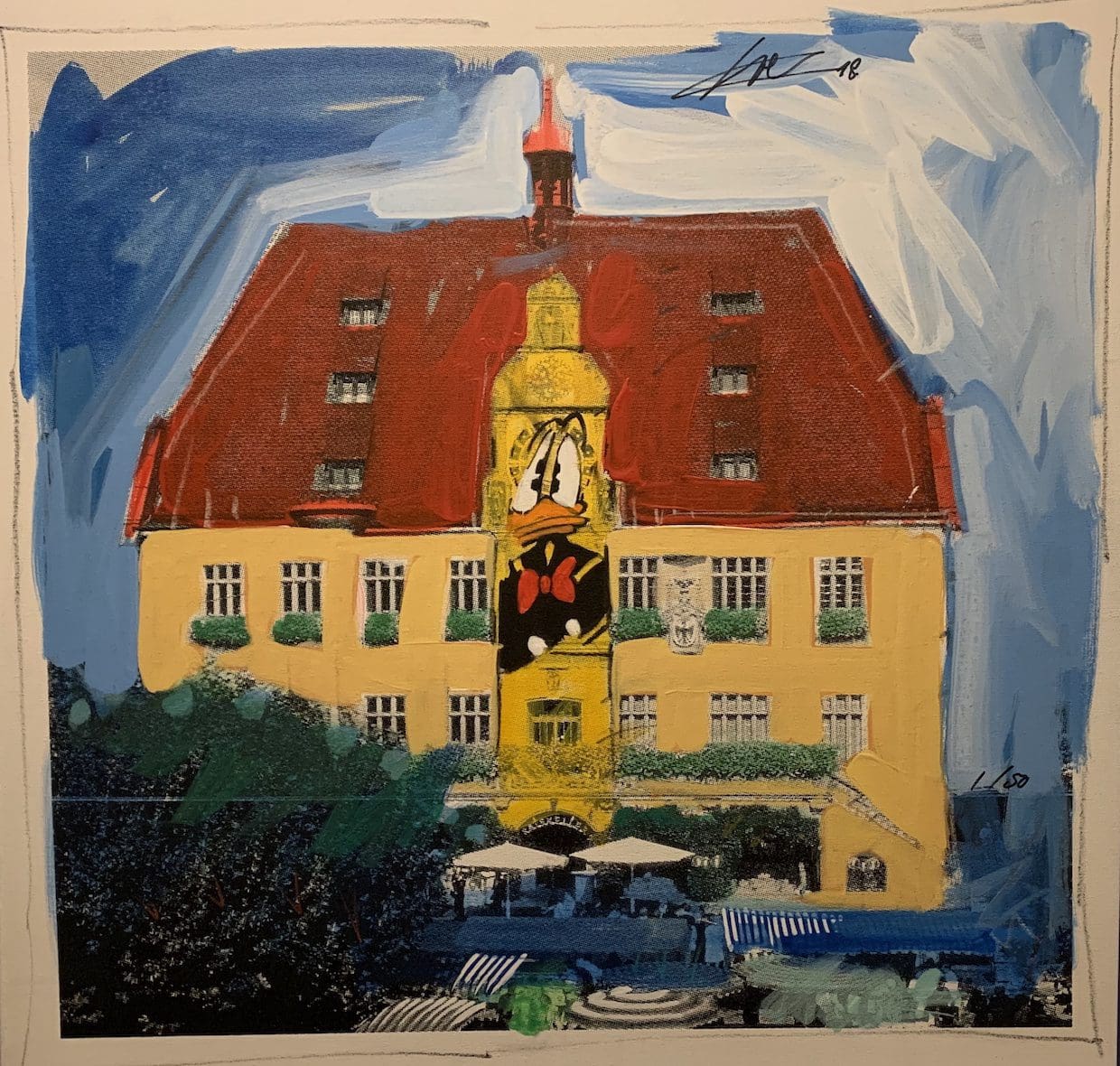 Just in time for the 50th Heilbronner Weindorf, I received a press release from the city of Heilbronn, which explains our new parking and traffic control system in more detail. I had obviously a few days ago noticed its trial run.

In any case, the information about this new Heilbronn flagship project is good, and I'm already looking forward to seeing how it will prove itself in everyday life.

The new parking and traffic guidance system now replaces the previous model, which is already 20 years old — time just flies by! In addition to the existing eight existing multi-storey car parks, it also connects three more. The two multi-storey car parks Bildungscampus Mitte and Ost as well as the large car park on Bahnhofstrasse have been added.

The system consists of a total of 31 dynamic sign locations with remaining space displays and in addition — I had already mocked that — more than 21 free text display boards that are placed on the most important access roads into the city area.

And now I also know the secret of the green and red parking rings, with the red parking ring signs directing traffic clockwise around this ring and the green ones counter-clockwise. This should make it easier for road users to find their way around the Heilbronn road network.

Unfortunately, my question was not answered as to why there are also signs that remind us a good thirty times that we are in Heilbronn. But we learn that the new parking and traffic control system cost 1,7 million euros, with the Federal Ministry of Transport and Digital Infrastructure funding 50% as part of the “Digitization of Municipal Transport Systems” funding program — I hope it will also be paid for.

I will definitely take a closer look at the new system in the coming months and maybe then I will find out how much this system costs us to maintain and how many city employees will be necessary for its operation, because 21 want free-text display boards be played daily! I'm assuming that we won't get any funding from the federal government for these running costs.

And so we can only hope that this investment of millions will at least offer a little more comfort for those looking for a parking space. However, I fear that most of them will continue to tirelessly make their rounds through Heilbronn in search of free parking spaces.

Who knows, maybe the responsible city employees will be able to teach these parking space seekers a little more environmental awareness and also more consideration for the Heilbronn residents who live in the city center with the new free text display boards. Then this new parking and traffic control system would certainly have been worthwhile for everyone.

I had some very good bilateral talks yesterday, during which I was — coincidence? — was asked by two sides that I would portray things in Heilbronn too negatively. I've noticed this too, so I'm a little surprised myself at how quickly I - actually a hopeless optimist - have become a "sarcastic" since my return to Heilbronn.

As already mentioned, it is not enough just to address problems, you also have to (want to) do something about them. But if the local solution approaches are "we've always done it this way" or "it's always been this way", but your own change requests are getting bigger (knowledge city), more wondrous (space city) and more urgent (university city), then you have to but ask what is wrong with it. In this regard, already Albert Einstein have said (I am happy about a reference to the source):

"The definition of insanity is to do the same thing over and over again and expect different results."

One could - especially me - still live quite well with that. Unfortunately, however, knives are sharpened very quickly in Heilbronn when citizens want to do something for all people in Heilbronn on a voluntary basis and completely unselfishly. And so it did not go unnoticed that I tried for a good 20 years and in the end almost desperately to keep Europe as a meeting point alive. An institution that was founded before my time by visionary people from Heilbronn and whose upkeep is my responsibility as district chairman of the EUROPA-UNION.

The tragedy isn't that it is the meeting place Europe no longer exists, but that other smaller, similar events have also disappeared by the way and you can definitely see a system behind them. This combined with other facts such as B. that there are no Heilbronn citizens with a migration background in the municipal council, Heilbronn is now probably the only big city in Germany that has not built its synagogue, where a new building of an existing mosque causes excitement in the entire municipal council, European flags against all rules and Laws can hardly be found in the city area or not at all and all existing signs of a common Europe (e.g. Europaplatz) are slowly but surely being dismantled. and industrial city doubt!

Heilbronn does not have to become a space city and certainly not a metropolis of some kind of fantasy, it would be quite enough if we became the heart and soul of the Unterland again.

And if you are already looking for volunteers everywhere, then you should support them in their voluntary work and not put obstacles in their way with flimsy arguments - because they do all this free of charge, mostly without expense allowances or other remuneration.

And so I really took yesterday's talks to heart, until I was told that the European meeting point, which cost the city less than 20 euros, was completely overpriced and could have been organized much cheaper and much better. The sarcastic in me is only on record: "Do it, don't talk!"

In addition to the Heilbronner Voice, which is very rarely found free of charge in the mailbox, you can, whether you like it or not, also pull the free Echo out of the mailbox. In the meantime I have come to terms with it, primarily because the Official Journal is also regularly packed in it.

And so I also look into the Echo from time to time and am pleased to see that it doesn't just consist of advertising. And so the Echo is an alternative for those who can't or don't want to pay for a voice subscription; the daily walk to the showcase on the avenue is not for everyone either.

The Official Journal is now also available digitally, so today I had the opportunity to browse through it a little earlier. All in all, the magazine has changed a lot for the better over the years and you can find the things that interest you most very quickly — a little thing that shouldn't be neglected!

But I was particularly pleased today that I can now also read things in the Official Journal that do not necessarily pass as self-promotion. And that's what distinguishes newspapers and newspapers from advertising, namely that, in addition to advertising, they also provide information and at least occasionally put their finger on the wound. A world in which all information and opinions are only positive cannot and does not exist!

That's why I think today's article of Michaela Ebert in the Heilbronner Stadtanzeiger (September 7.9.2022th, 2: XNUMX) under the title "Really disgusting" almost for revolutionary - and in a positive sense!

And yes, we have a garbage problem in Heilbronn! — I am still firmly convinced that this is caused by an educational and upbringing problem. So we have to take drastic measures until the general level of education in Heilbronn allows garbage-free strolling in Heilbronn. Knowing the problem is not enough! And so I agree Michaela Ebert fully agree when she concludes her report with the following: "For the visitors to Heilbronn, that was definitely not a good impression of Käthchenstadt..."

It has to be now!

If citizens of Heilbronn report too negatively, this is bad!

If Heilbronn municipal councils "post calls for murder" or "spread shit", on the other hand, that's perfectly fine.

I'm probably the only one from Heilbronn who takes issue with it.