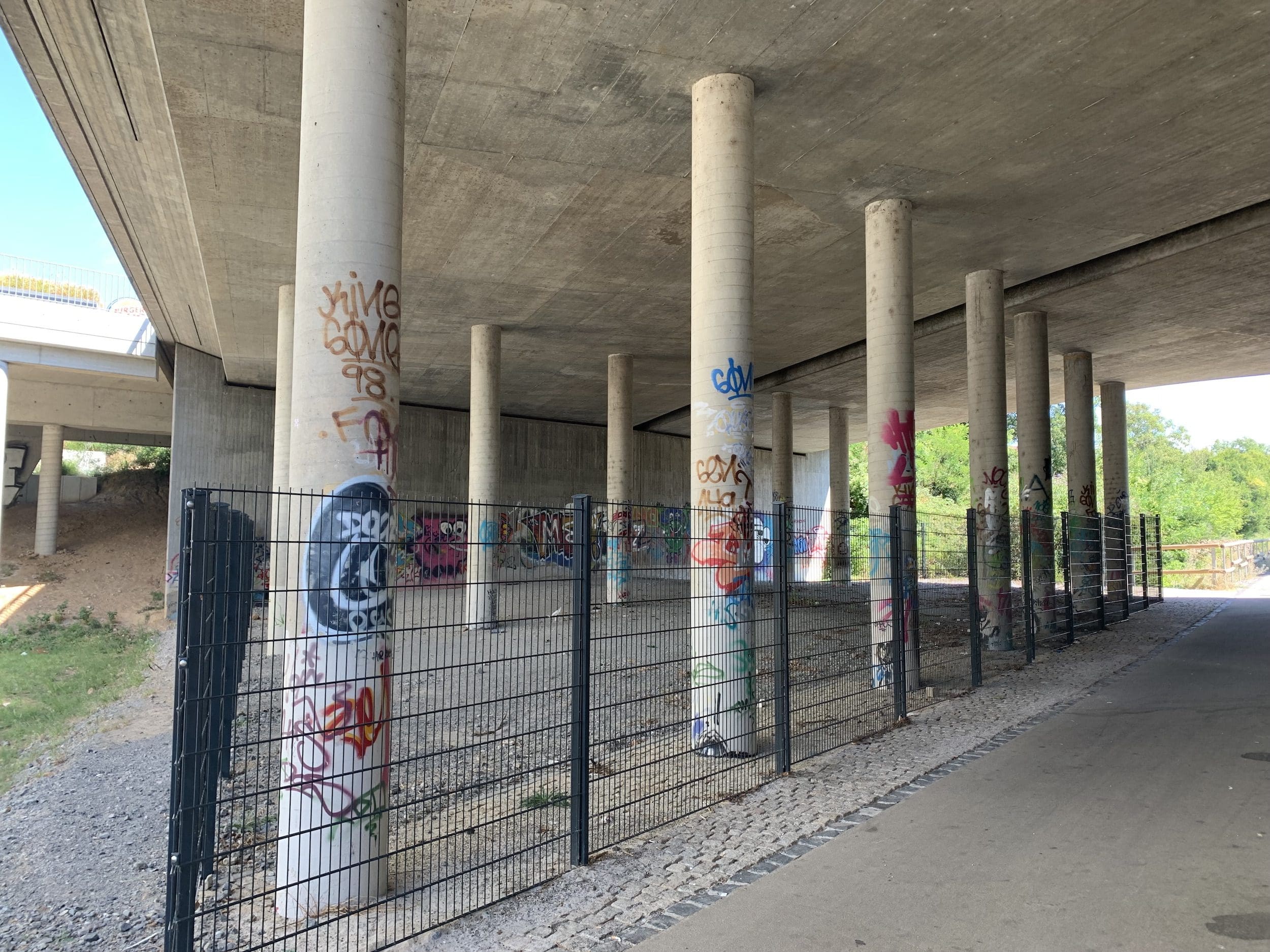 And I used to think that the times in Heilbronn, when both the mayor and the municipal council always had money for festivals, celebrations and trips, but none for children's playgrounds, are long gone. In the meantime, even the times when Heilbronn was the first UNICEF children's town in the world are long gone - times are changing enormously ...

When I was a child, there was a micro children's playground just around the corner in the Kirchhöfle, which not even adults entered. As long as there were still two see-saws in the old cemetery, we made the pilgrimage there and later to the Pühlpark to see some play equipment. My parents then rededicated several car parking spaces and set up a playground at their own expense so that we children — and there were quite a few of them back then — could play at least in the neighborhood reasonably safely.

My better half later learned the importance of playgrounds when she visited me with our two children in Paris, because she was constantly looking for one throughout her stay in Paris. And so we were both really proud of our hometown when we — the children already grown up — returned to Heilbronn and saw that in Heilbronn they now attached great importance to sufficient and good children's playgrounds.

I was recently able to learn that many of our children's playgrounds are to fall victim to the "compulsion to economize", because in the coming elections the pensioners will again tip the scales and, as is well known, they go to the Weindorf, but not to a playground! And as a city councilor, you have to set priorities.

But our city administration would rather throw our money out the window for completely senseless and pointless actions than to run small infrastructure projects sustainably. But it is precisely those often inconspicuous urban projects that make a city really livable and lovable!

There would be enough space for such projects in Heilbronn, and one could also consider having them looked after on a mini-job basis or perhaps even on a voluntary basis by sprightly retirees; such expenditure would be beneficial to all parties involved.

And in the event that these expenses have to come from a very specific pot and an internal redistribution would completely overwhelm all those affected, you can also think about whether it really makes sense that we offer the kindergartens free of charge - don't get me wrong even at times when kindergarten places cost money, there were exceptions for needy families. And we really all know that everything that costs nothing is also worth nothing!

And that's why I don't understand at all that recently in the municipal council the costs for children from 0 to 3 years in the crèches were "frozen" and not, as demanded by all experts and responsible specialists, were adjusted to today's times. Because if you have to increase the costs later, the jump in costs will be so huge that it will throw many families completely out of control. I accuse those parties who pushed through this wrong decision in the municipal council of pure populism and complete irresponsibility!

But to end this post on a positive note, I suggest converting the free space shown in the picture above into a multi-purpose space for pensioners to children, where a few robust sports and play equipment are available to everyone until the evening ; the walls could then even be provided with advertising from the sponsors.

I have said this several times here, namely that I am a supporter of the new mosque building am at Berliner Platz and this exactly as planned.

However, I would also like to point out from the outset that this is also about the mosque on Berliner Platz and not about a party headquarters of the Turkish governing party, whose actual task is to get the votes of as many people in Turkey as possible for this party in Turkey to secure Turks living abroad. Even if I am an advocate of the fact that all religions also play a state-supporting role and that this is the only way they can survive in a society, I am also a proponent of the idea of ​​separating religion and state. And this is not a contradiction!

That's why I say "yes" to the Mocheeneu building, but also "no" to a Turkish institution on Berliner Platz. And with that, I agree with all citizens of Turkish origin with whom I have spoken in recent years. And a lot of non-Muslim people in Heilbronn can also make friends with it.

Therefore, in order to relax the whole discussion about the construction of a new mosque, I also propose that there should be a corresponding discussion group. In addition, a Turkish flag has no place in front of a mosque, just as little as a German flag in front of our churches, mosques or synagogues.

And in order to end the tiresome discussion about a party headquarters, it would be a good idea not only to enter the Islamic community of Heilbronn in the land register as the owner of a mosque, but also to appoint the mosque on Berliner Platz as a neighborhood center in which all residents of the " Quartiers" — my real home — to settle in and feel good. The other rooms that have already been planned could then not only be used by the mosque community, but also by other associations in Heilbronn — which will certainly also help the community financially.

All of this would then be exactly that Integration, which we have all been talking about in Heilbronn for so long!

Today I met again Michael George Link Member of the Bundestag for a personal interview. When we meet, it's all about the good old days, because we've known each other for a long time. What was new for me was that he had been there since April of this year Federal Treasurer of the FDP is. And surprising for him that I have been for a few days Chairman of the Free Voters Heilbronn am. There is no question that a lot has changed over the years.

The nice thing about these conversations, however, is that you can talk to each other in a completely relaxed and very pleasant way, especially if you have opposing opinions. The good thing is that you can also talk to someone who doesn't talk to you! And that's good entertainment. It goes without saying that these personal conversations are conducted without protocol and ulterior motives - just a conversation among friends.

Incidentally, I was able to thank him that, despite his commitment at the federal level, he still finds the time to actively participate in the 6th Hertenstein Talks on Saturday, September 17, 2022.